BOSTON - As we approach the 40th anniversary of the establishment of the United States De-partment of Education in May, shocking trends in student performance should lead us to recon-sider the federal role in education and whether the initiative for policymaking should be returned to local schools, communities, and states.

Breaking with decades of slow improvement, U.S. reading and math scores on the National As-sessment of Educational Progress (NAEP) and other assessments have seen historic declines since most states implemented national Common Core English and math curriculum standards six years ago, according to a new study published by Pioneer Institute.

While Common Core was promoted as improving the international competitiveness of U.S. stu-dents in math, our international standing has remained low while the skills of average and lower performing American students have dropped in both math and reading. 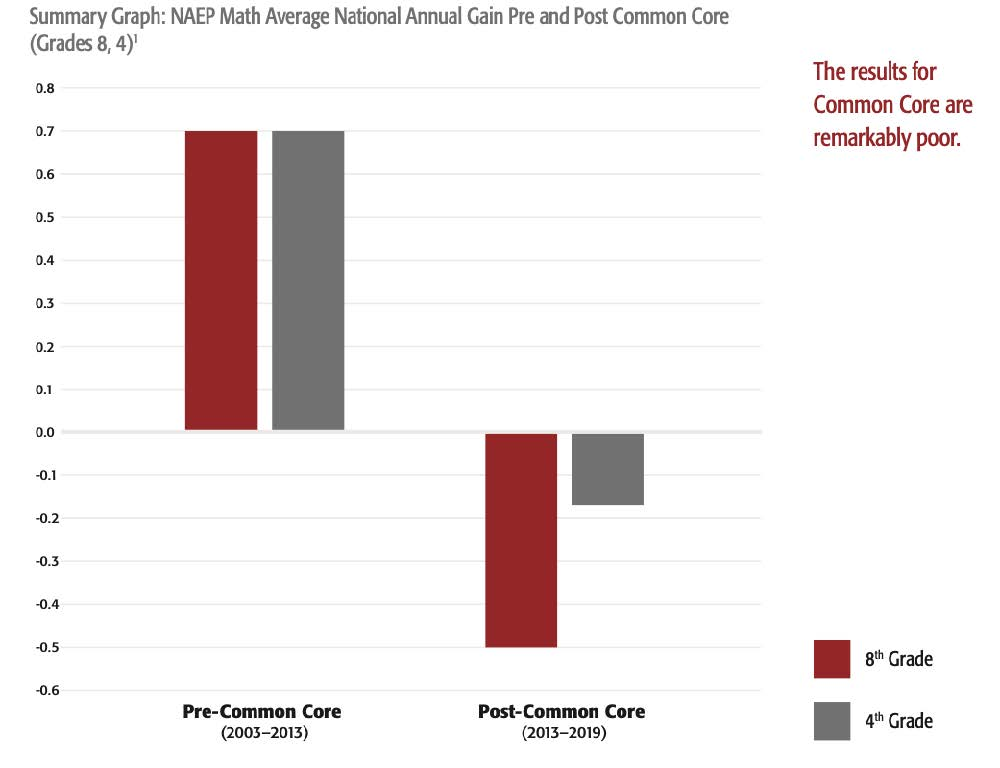 Nationally, fourth- and eighth-grade NAEP math scores were rising gradually in the years before Common Core was implemented (2003-2013). Post-Common Core, scores at both grades have fallen, eighth grade at nearly the same rate as it was previously increasing.

The declines are most acute for the lowest-achieving students, increasing inequality. Scores for students at the 90th percentile have mostly continued their pre-Common Core trend of gradual improvement. But the farther behind students were, the more substantial the declines, with the biggest drops occurring for those at the 25th and 10th percentiles.

U.S. students fare better in reading than they do in math when compared to international compet-itors, but U.S. reading trends are similar to those seen in math, with gradual pre-Common Core improvement replaced by declines after Common Core was implemented.

Rebarber also finds that Common Core is a product of the misguided progressive pedagogies and biases of the education establishment that developed it. “Several of us allied with Pioneer Insti-tute have been pointing out, ever since it was introduced, the deeply flawed educational assump-tions that permeate the Common Core and the many ways in which it is at odds with curriculum standards in top-achieving countries.” Unfortunately, the disappointing results of Common Core—particularly for lower performing students—were predicted in 2010.

“Nearly a decade after states adopted Common Core, the empirical evidence makes it clear that these national standards have yielded underwhelming results for students,” said Pioneer Execu-tive Director Jim Stergios. “The proponents of this expensive, legally questionable policy initia-tive have much to answer for.”

“It’s time for federal law to change to allow states as well as local school districts to try a broader range of approaches to reform,” added Rebarber. “With a more bottom-up approach, more school systems will have the opportunity to choose curricula consistent with our interna-tional competitors and many decades of research on effective classroom teaching.”

Theodor Rebarber has worked on education reform and policy for three decades in the public, nonprofit and private sectors. He currently leads nonprofit AccountabilityWorks, which conducts education policy research and offers online testing services at AWSchoolTest.com. Previously, he was co-founder and chief education officer of a venture capital-backed charter school man-agement company. Rebarber served as a senior staff member in Congress. He worked on educa-tion policy, including curriculum standards and testing, at the U.S. Education Department for the office of research and at the Vanderbilt Institute for Public Policy Studies. He has testified before Congress and state legislatures as well as developed analyses on a range of education policy top-ics.