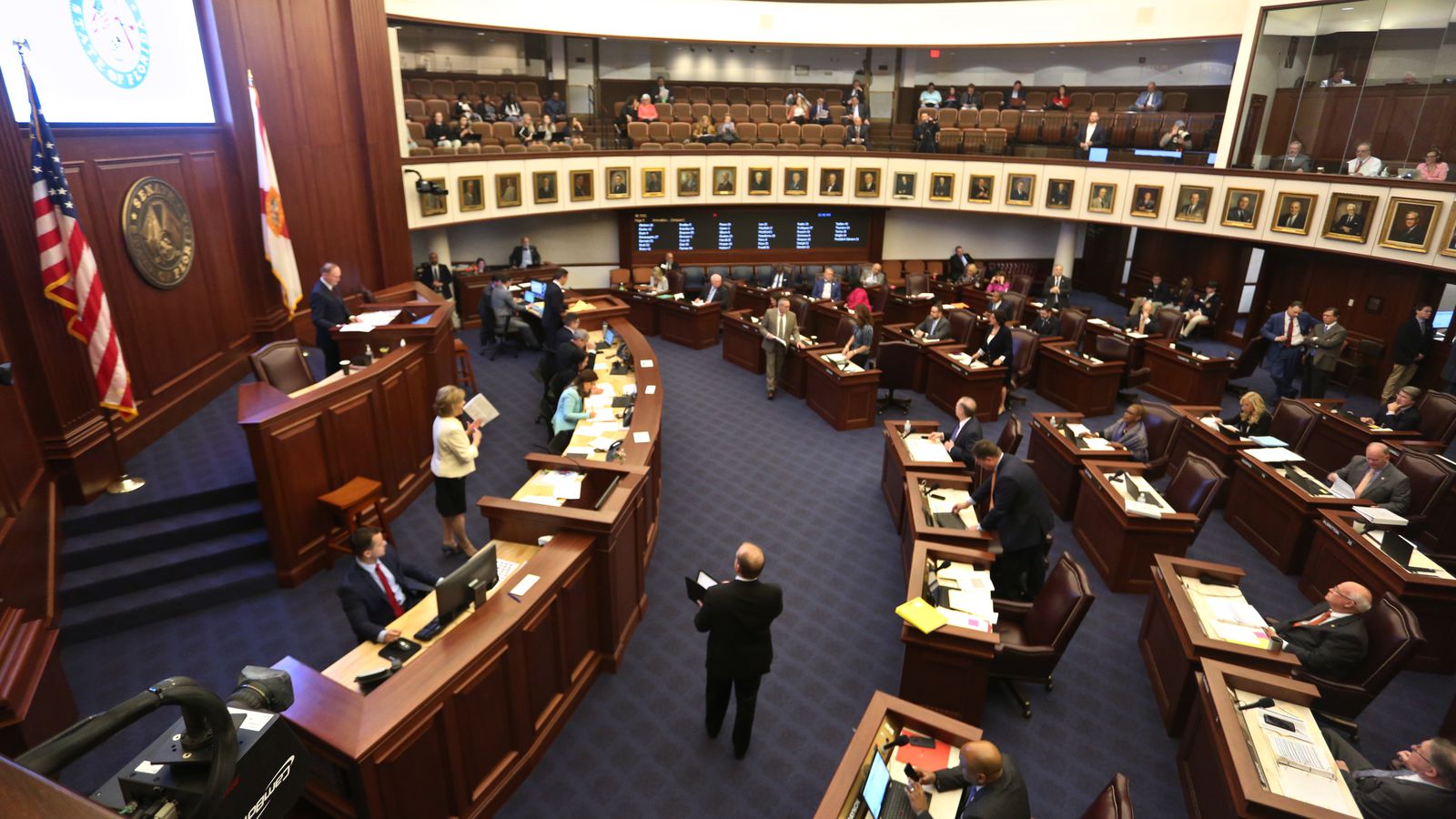 Members of the Florida Senate fill the chamber toward the end of the 2020 legislative session. One big focus of this year's session will be a proposal by Senate Republicans to greatly expand programs that allow families to attend private schools using public money. [ SCOTT KEELER | Times ]   Published 01/26/2021

TALLAHASSEE — Florida Senate Republican leaders are set to push sweeping legislation this year that could bring what many advocates consider to be the holy grail in the school choice movement: education savings accounts for students.

The 158-page proposal would merge the state’s five key school choice programs and make them all state-funded. It would also convert the scholarships into more flexible education savings accounts that families could use to pay for children’s private tutoring, therapy, private schooling or even college savings.

Senate President Wilton Simpson, R-Trilby, said the measure, Senate Bill 48, is meant to untangle a “pretty confusing system of scholarship programs” that Florida has set up over the years. Bill sponsor Sen. Manny Diaz of Hialeah, a staunch school choice advocate, said the effort aims to give parents a clearer idea of their options.

The proposal is expected to become a high-profile issue during this year’s legislative session beginning March 2, and is likely to open the floodgates for a decades-old debate on whether taxpayers should fund private and religious education over traditional public schools.

The pandemic will add another layer to the debate.

Senate Democrats are already questioning whether the time is right to talk about expanding school-choice programs.

“I think our priority needs to be us looking at students who are not succeeding due to the COVID-19 slump that exists right now,” said Sen. Shevrin Jones, vice chairman of the Senate Education Committee, where the bill will be first heard.

Ralph Arza, a former Miami lawmaker and current charter school lobbyist, said Diaz’s proposal is a “natural progression” of the school-choice movement in Florida over the past two decades, and argued the pandemic has exposed educational needs that could be aided by more choice.

Parents have also become more accustomed to the concept of “boutique” schooling, where they can choose from in-person, live virtual and remote learning, or other options like homeschooling.

“There is no doubt that parents are looking at other options for their children more now than ever. There is no question,” Jones said. “But the question still becomes, do we do this right now when our public schools are really crying out for guidance on how we are going to get these students back on track.”

So, what’s the plan?

The scholarships would be part of an educational savings account (ESA) that families would be allowed to use to pay for educational expenses such as private tutoring, standardized test fees, therapy and transportation, as well as tuition costs.

Doug Tuthill, who leads Step Up For Students, the state’s largest scholarship funding organization, praised the legislation for providing increased flexibility for parents.

“ESA’s are great for families,” said Tuthill, a former Pinellas County teacher union leader. “Right now, the scholarships are very limited in what they can be used for.”

Under the proposal, the state would pay for the vouchers that previously have been scholarships funded by private donors who received tax credits. Tuthill said that change would return about $800 million to state coffers.

His argument is based on the premise that the state would save money by directly funding the vouchers rather than the current system of doling out tax credits to private donors.

It would provide donors the chance to contribute to a state education trust fund, he added, so they might continue to receive the same tax benefits.

Scholarship funding organizations such as Step Up, meanwhile, would transition away from collecting contributions and focus their efforts on managing education savings accounts, Tuthill added.

They would review applications to determine eligibility for the accounts, he explained, and make sure the expenditures that families make are appropriate. The organizations could claim an administrative fee up to 2.5% of the account total.

The organizations would be audited once every three years, instead of the current annual review required under state law. Critics have questioned the impact this would have on oversight and accountability.

“What SB 48 purports to do in terms of using general revenue to pay for religious education puts the measure in peril,” said Meyer, who won a landmark lawsuit against the state’s original voucher plan promoted by Jeb Bush.

The bill sponsors “are selling it as streamlining five (programs) into two,” Meyer said. “But it does so much more.”

The Florida Education Association has toyed with the idea of suing the state to stop the taxpayer-funded “Empowerment Scholarship.” No suit has been filed, though the state was prepared to spend at least $250,000 to defend a potential challenge to the program.

Meyer said the lack of a lawsuit shouldn’t embolden lawmakers to advance this expansion plan.

“The constitutional issues are still front and center,” he said.

The legislative road ahead

When Senate Democrats first got wind of the bill, most worried about funds being diverted from traditional public schools when COVID-19 has placed budget constraints on state and local governments.

“It is really a dangerous thing for education, and in a challenging budgetary year even more concerning,” Senate Minority Leader Gary Farmer told his Democratic colleagues in a virtual press conference.

The bill has been assigned to three committees. It could get a hearing before the legislative session starts in March, Jones said.

Jones said he is willing to talk about streamlining the state’s scholarship programs. He held off on his criticism — for now.

“Do I want to go into committee and fight like hell for public schools? I can do that,” Jones said. “But is it beneficial right now rather than us trying to figure out what is the best compromise that we can come up with?”

Other stakeholders are doing the same thing.

The Florida School Board Association expects to review the measure in the next week or two.

“We are still analyzing it to understand its full impact,” FSBA Executive Director Andrea Messina said.

The measure has yet to gain the endorsement of education commissioner Richard Corcoran, though in 2011, when a Florida House member, he co-sponsored legislation to create an education savings account.

“The commissioner thinks highly of Sen. Diaz, and is, as you know, very supportive of school choice for Florida students,” DOE spokeswoman Taryn Fenske said. “We’re still reviewing the bill.”

The House does not yet have a companion bill.